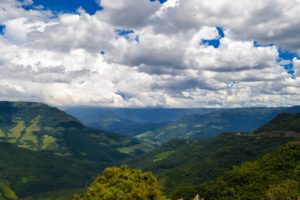 Deforestation can be linked to virtually any consumer product on the market, making it a major concern for shoppers looking to make more ethical and sustainable purchases. More and more consumers today fall into this category: according to a 2015 survey, nearly 90% of consumers would be more loyal to a company that supports a social or environmental issue, and 66% would pay a premium for products from socially responsible companies.[1] Clearly, eliminating deforestation in the supply chain is not just an environmental issue, but a business one.

Deforestation refers to “clearing [of the] Earth’s forests on a massive scale, often resulting in damage to the quality of the land.”[2] According to WWF, approximately 46,000-50,000 square miles of forest are lost to deforestation each year.[3] Land is most commonly cleared for subsistence farming (48% of deforestation) and commercial agriculture, including commercial crops (20%) and cattle ranching (10%).[4]

Deforestation has significant environmental consequences, including the loss of habitat for millions of species, fluctuating temperatures that harm plant and animal health, and climate change due to the loss of trees that absorb greenhouse gases.

With 20% of deforestation a result of commercial agriculture, consumer products are directly impacted, although it may not always be apparent. Some of the most commonly used commodities have direct links to deforestation, and can be found in a surprising variety of products. 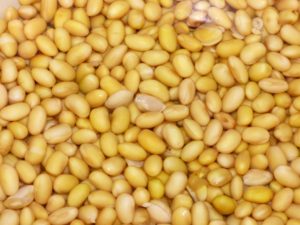 It goes without saying that soy can be found in the food we eat—but not solely in the form of soy milk or tofu. In fact, soybean meal is the largest source of protein feed in the world, making its way into the feed for poultry, pork, cattle, or even farmed fish.[5] As a result, consumers around the world not only consume soy directly, but also indirectly via the meat on their dinner plates. This infographic from WWF demonstrates how soy can be found in different kinds of food, including ones we wouldn’t necessary expect.

In addition, soy also has several non-food uses and can be found in a myriad of items, including paint, ink, wax, cosmetics, crayons, puzzles, plastics, and fertilizer.[6]

Because of the large scale of soy agriculture, forests in South America such as the Amazon have lost vast areas of land. To date, the Amazon has lost at least 17% of its forest cover, with soy production in the Brazilian Amazon tripling between 1990 and 2006.[7] 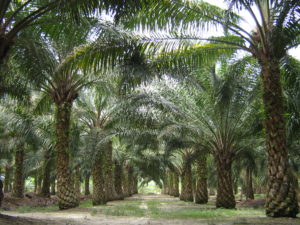 Palm oil is the most common vegetable oil in the world,[8] and can be found in approximately 50% of both food and non-food products on supermarket shelves.[9] Palm and palm kernel oil are used in a vast variety of products including processed foods, cosmetics, and animal feed, as well as in the biofuel, pharmaceutical, and industrial industries.

The majority of palm oil production occurs in Southeast Asia, in Malaysia and Indonesia.[10] Approximately 20% of the land cleared for palm oil plantations in these two countries is covered with carbon-rich peat soil, which, when drained and burned for agricultural use, releases massive amounts of carbon and methane.[11] This negatively impacts not only the environment and wildlife; the particles released into the air due to landscape fires (such as peat fires) cause approximately 110,000 deaths in the Southeast Asia population annually.[12] 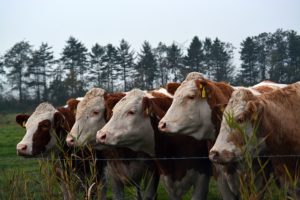 Cattle ranching accounts for 80% of current deforestation rates in Amazonian countries, and is the largest driver of deforestation in the region.[13] Brazil is an especially prominent exporter of beef, exporting $6.7 billion worth in 2013.[14]

Beef is in high demand globally, and is the third-most widely consumed meat in the world (after pork and poultry).[15] In 2016, ten countries—Uruguay, Argentina, Hong Kong, United States, Brazil, Paraguay, Australia, Canada, Kazakhstan, and Chile—each consumed more than 50 pounds of beef per capita, or approximately one pound per person per week. The top three countries each consumed over 100 pounds per capita.[16]

The scale of cattle ranching comes at a significant cost to the health of the environment. As with other forms of agriculture, huge swaths of forests, such as those in Brazil, have been cleared to create ranches. Today, approximately 450,000 square kilometers of deforested Amazon in Brazil are now in cattle pasture. 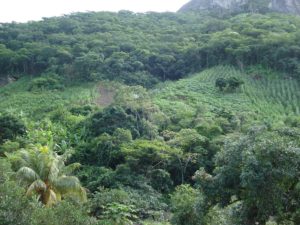 Many efforts are being made to eliminate deforestation from supply chains and source soy, palm oil, and beef more sustainably. Below we take a look at just a few of these initiatives:

The Round Table on Responsible Soy (RTRS) Certification indicates that soy, whether as a raw material or a by-product, originated from a process that is environmentally correct, socially adequate and economically viable. To be certified, companies must comply with the RTRS Standard for Responsible Soy Production, which includes standards for environmental responsibility and good agricultural practices.[17] In 2016, RTRS certified producers produced over 3.1 million tons of responsible soy.[18]

Additionally, the “Soy Moratorium”—an agreement between civil society, industry and government that prevents major traders from selling soy linked to deforestation in the Brazilian Amazon—was established in 2006 and renewed “indefinitely” in 2016.[19] In the 10 years following the moratorium’s inception, deforestation in the municipalities covered fell 86%.[20]

The Roundtable for Sustainable Palm Oil (RSPO) has developed a set of “environmental and social criteria which companies must comply with in order to produce Certified Sustainable Palm Oil (CSPO).”[21] Palm oil producers who meet the RSPO Principles & Criteria, which include demonstrated commitment to transparency and responsible planting, are eligible for RSPO certification. Currently, 21% of global palm oil is certified by the RSPO.

The cattle ranching industry has had the most difficulties achieving deforestation-free supply chains, when compared to soy and palm oil. In 2009, four of the world’s largest cattle producers agreed to a moratorium, known as the G4 Agreement, on purchasing cattle from newly-deforested regions in the Amazon.[22]

Since then, however, progress has largely depended on corporate initiatives. In 2017, the Union of Concerned Scientists (UCS) challenged 13 major brands to “guarantee that their beef has no links to deforestation, and can provide the data necessary in order to verify such claims.”[23] Brands such as McDonald’s, for example, have committed to eliminating deforestation from their beef supply chains by 2020[24]—but the results of these commitments remain to be seen.

Technology for a deforestation-free future

Digitizing and mapping supply chains from source to store is an important step in eliminating deforestation from consumer goods. Technology solutions such as Transparency-One can help companies gain the supply chain transparency needed to identify and improve existing practices. With the Transparency-One platform, companies can:

By taking steps to better understand their end-to-end supply chains, companies can make progress towards eliminating deforestation and making a positive impact not just on their bottom line, but on the planet.

How ethical is the denim supply chain?

How ethical is the denim supply chain?