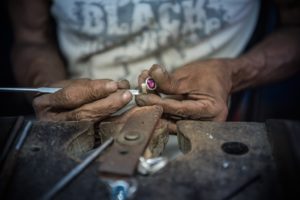 Behind every consumer good product – food, toy, cosmetic, apparel, etc. – there is a human being. Most of us have forgotten that and just see the product as an object. But the product has a story which can be long and complicated, much like a supply chain. A consumer good product is made out of several raw material ingredients that need to be produced, transformed and transported to their final destination. But have you thought of who produces and makes all of these products?

Today, even if the consumer good product is the best – in terms of taste, efficiency, look, etc. – there is still another aspect that cannot be forgotten: the price. And this sometimes becomes the most important part of the product. With globalization, a product can be transformed far from the store where it will be sold, in a country with cheap labor. Cheap labor usually implies low or inexistent labor laws, or even modern slavery or child labor. According to UNICEF, an estimation of 150 million children worldwide are engaged in child labor.

However, the laws are changing, especially in the developed countries.

And those laws are already making an impact.

In the US, a recent example involves PureCircle stevia, who has been asked by the US Customs and Border Protection to prove the stevia was not produced by forced labor. They have 3 months to justify the workforce used to produce Stevia and therefore compile a list of their entire supplier network. This product is used by companies like Coca-Cola, PepsiCo, and other popular sodas. This shows that one ingredient can impact several other companies, and maybe you.